Coworking Spaces in San Francisco: A Place Where Ideas Turn to Success

Kevin Systrom and Mike Krieger quit their job at Facebook to create an app that would display pictures as diaries. After repeated failures, it developed and later launched successfully as Instagram, which started the selfie culture.

Founders Travis Kalanick and Garrett Camp began working on an app that would eliminate taxi troubles in San Francisco together with a team of eight people. After receiving support from the community, they launched Uber in a startup office space in San Francisco, which today operates in over 80 countries.

Both of them started in San Francisco, the land of startup success stories. But, what these two successful startups have in common is where it all began: a coworking space in San Francisco. In fact, these founders say that they wouldn’t be able to make it so far without the support they received from these spaces. 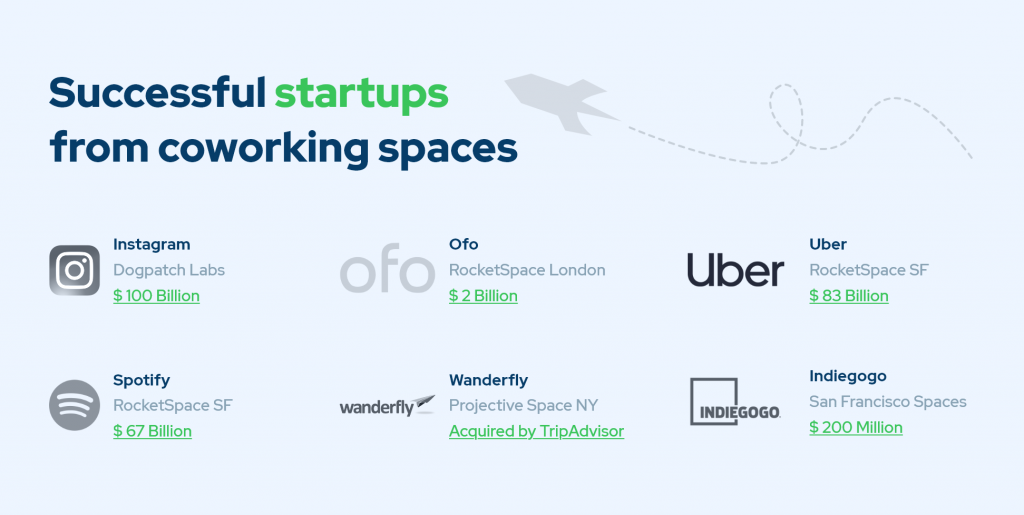 Coworking spaces are more than just a trend. It is a place where startups set their journey to becoming the next Instagram or Uber. Where does it all start? It all begins with an idea!

How do startups understand the idea?

To come up with an idea, one must be creative. Today, creativity is the most desirable skill an entrepreneur must have. As Fortune 500 leaders say, this trait is vital to a successful startup. But to understand creativity, we need to delve into “ideas.”

Ideas usually start with a problem. In the hopes of finding a solution, ideas can come from different sources. It may be from books, movies, news, or our daily lives. Hence, coming up with an idea requires keen observation skills. But who does it? Well, it comes from us. But that doesn’t mean it comes from us, alone.

There is this misconception that an idea is a single concept. However, in Steven Johnson’s TED Talk “Where Ideas Come From?” he believes that an idea is a network. Where a new idea is a new network of neurons brewing in sync with each other inside your brain. Since ideas are networks, interaction has to be involved. Since the best ideas don’t just come while sitting on a monitor or sitting on a blank page.

Samsung Semiconductor Vice President Scott Birnbaum echoed this sentiment in the 2014 Harvard Business Review article when he thought of the company’s then-new U.S headquarters. He expressed that he wanted a design that would allow engineers and salespeople to mingle, not just work separately.

Researcher Kevin Dunbar decided to go around trying to figure out where good ideas originate. So, he decided to visit numerous science labs worldwide and record everyone who is doing their job. Then he recorded the conversations that took place among the scientist and other people involved in the work.

So this is what he realized, the usual image of scientists just poring over the microscope and trying to investigate what they see until they have the Eureka moment isn’t where the best idea comes from. It is actually in the conference room where they all discuss their findings. There, they try to come up with solutions that would solve the problem. This would later result in a product.

That is why it required more people, not just the founder, to develop an app that would help people listen to music and create their playlist on the go. This would later result in Spotify.

That is why it needed four co-founders and a handful of employees to work together to discuss how people can discover new experiences without compromising their budget. This would later launch to Wanderfly is a startup office space in San Francisco.

Why entrepreneurs use a coworking space?

A University of Michigan research says that the most common reasons people seek coworking spaces are interaction with people, problem sharing, and random discoveries.

If you notice, these spaces have open floor designs that would invite collaboration. That is why interacting with peers that would later turn to people who will help your business is possible.

People can discuss the problems at hand and find the solution they need to solve the problem. With interaction comes idea generation leading to a random discovery and later turn into a product that would solve your problem. The design of these coworking spaces was able to benefit successful startups like Charity: Water, Indiegogo and Ofo.

Start your startup journey with us!

San Francisco is a perfect place to begin your startup! Dynamico Space is located in the hub of innovation where the businesses mentioned above started. It has a flexible coworking space to start your journey to success. We give you flexible options for you and your team where you can generate ideas and discuss. Schedule a tour now! Call us today!

If you’re interested to know more about startups, here’s an article on the challenges every new startup entrepreneurs face plus solutions!

We use cookies on our website to give you the most relevant experience by remembering your preferences and repeat visits. By clicking “Accept”, you consent to the use of ALL the cookies.
Cookie settingsACCEPT
Manage consent

This website uses cookies to improve your experience while you navigate through the website. Out of these, the cookies that are categorized as necessary are stored on your browser as they are essential for the working of basic functionalities of the website. We also use third-party cookies that help us analyze and understand how you use this website. These cookies will be stored in your browser only with your consent. You also have the option to opt-out of these cookies. But opting out of some of these cookies may affect your browsing experience.
Necessary Always Enabled

Performance cookies are used to understand and analyze the key performance indexes of the website which helps in delivering a better user experience for the visitors.

Analytical cookies are used to understand how visitors interact with the website. These cookies help provide information on metrics the number of visitors, bounce rate, traffic source, etc.

Advertisement cookies are used to provide visitors with relevant ads and marketing campaigns. These cookies track visitors across websites and collect information to provide customized ads.

Other uncategorized cookies are those that are being analyzed and have not been classified into a category as yet.